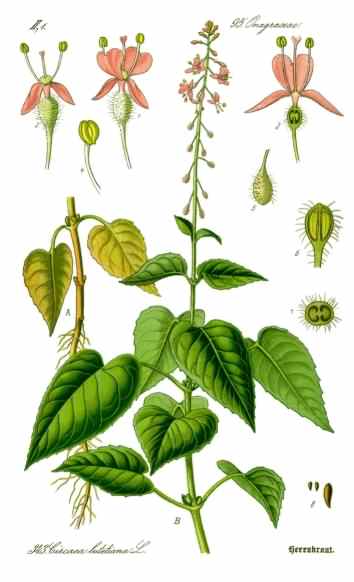 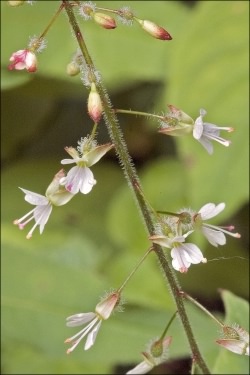 Enchanter's Nightshade is a perennial plant in the Onagraceae or Willowherb family of which Evening Primrose is also a member.  Native to the U.K, Europe, Canada and the eastern United states, it is common in woods and shady places, growing to 60cm (2ft) in height from spreading stolons, growing well on rich moist soils, it can become quite invasive in good growing conditions and can become troublesome in gardens where a variety known as "Caveat Emptor" which has mottled pink leaves, is the usual variety.

Dark green heart shaped hairless leaves with toothed edges are around 4–13cm (1.6–5in) long by 7cm (3.0in) wide, on stalks as alternate pairs on a single slightly hairy stem becoming glabrous with age.  Leaf pairs become smaller further up the stem which finishes as a raceme of sparse small white to pink flowers of paired lobed petals, sepals and stamens on a short pedicel.  Flowering from June to August, each flower matures to a small burr like fruit which aids distribution, 3.5–5mm (0.14–0.2in) in diameter containing a single seed.  The flowers and leaves are attractive to small bees, flies and moth caterpillars.

Despite its name it is not especially toxic, but does contain a lot of tannin, it is not related to other Nightshades.  The plant over winters as rhizomes