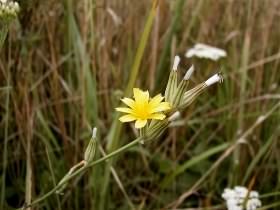 Photo ©2005 Sugarimp
Click any photo for a larger image 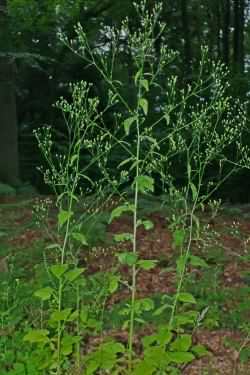 Native to Europe and northern Asia with six subspecies generally recognized, introduced and naturalised in other areas (North America, New Zealand and Australia, Nipplewort is a single species in the Lapsana genus within the family Asteraceae.  Found in waste grounds, agricultural fields, stream banks, roadsides and walls, it is an annual or perennial common weed of cereal crops growing from fibrous roots to 1–1.2m (39–60in) tall, hairy stems with alternate leaves, those at the bottom of the stem are often pinnate.  Smaller leaves higher on the stem are simple oval, all leaves are toothed.  Hermaphroditic yellow flowers appear from June to September in numerous loose clusters of capitulum 1–2cm (0.4–0.8in) in diameter at the top of the stem.  The flowers are pollinated by bees, flies, butterflies and are also self–fertile.  Seeds ripen from August to October.  Sometimes confused with Sow–thistle or Prickly Lettuce.

FBCP do not advise or recommend that Nipplewort – Lapsana communis is eaten or used as an herbal remedy.   At one time Nipplewort was apparently cultivated as a vegetable, young leaves being edible, and can be used in salads or cooked like spinach.  They have a bitter or radish–like taste.  The English name "Nipplewort" derives from its closed flower buds which resemble nipples and because of this resemblance it was once used as treatment for breast ulcers.