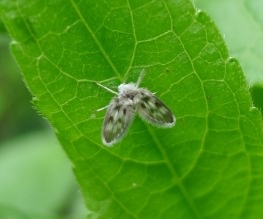 A very small midge around 2.5mm (0.1in) long body with slightly longer wings.  Overall they are very hairy, including the wings which are black with white spots with a grey border.  They are supposed to look rather like an Owl when stationary, having an almost cute fluffy grey appearance.  The larvae of this species develop in stagnant waters or hollow, rotting trees.

Apparently 73 different species are acknowledged, which are predated by bats and birds.  They are seen most abundantly in Spring and Summer but are largely nocturnal so are most commonly found on the shady side of tree trunks and under the leaves of Goat Willow, when seen in Brickfields Park.  Owl midges breed in decaying matter and are one of the small insect species that pollinate Cuckoo Pint.