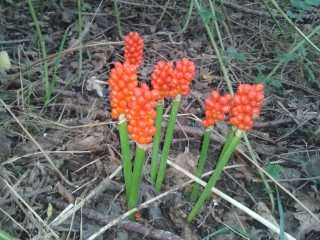 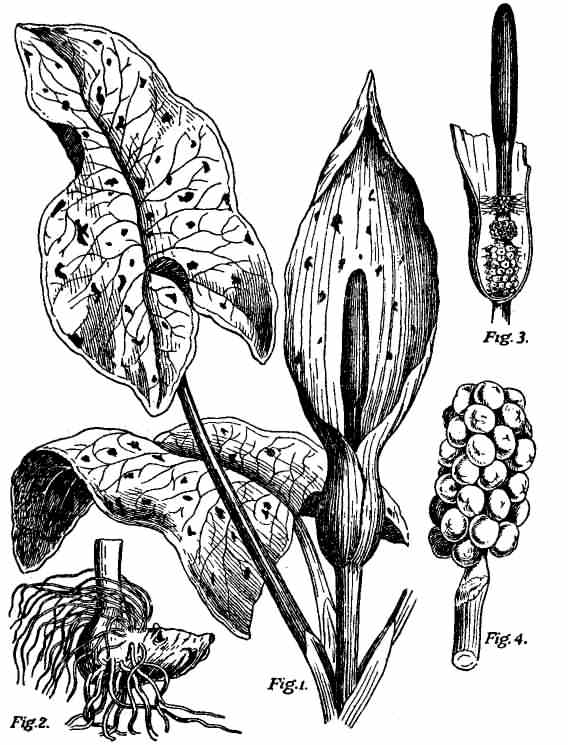 A hardy native European perennial of the Araceae family (of nearly 1000 species), common in England and Wales and most of Europe but rarer in Scotland and Ireland.  Found in woods and hedgerows, it grows in deep shade up to a height of 50cm (19in), occasionally grown as a house plant.  The name "Lords & Ladies" and other gender related names refer to the plants likeness to male and female genitalia symbolising copulation.  "Pint" is a shortening of the word "pintle", meaning penis, derived from the shape of the central spadix.  Upward pointing, arrowhead shaped, dark green glossy leaves, darkening with age with some plants having a dark brown or black spotty marking, they grow from a tuberous root system used to store starch and which may be very big and quite deep below ground.  One of the first plants to appear in the spring they are generally seen from April and May, the primitive flowers are found inside a light yellow/green cowl (Spathe) surrounding a dark brown rod shaped central stem (Spadix) bearing both male and female parts.

The lowest set of flowers in the Spathe mature to a cluster of attractive but poisonous red berries in July and August, these berries remain on the plant for some time, long after the leaves have gone.  All parts of the plant are poisonous with the following symptoms - burning and swelling of the lips, mouth, tongue and throat, stomach pains, dizziness, cramps, vomiting & heart failure after eating the berries.  Toxic constituents are calcium oxalate crystals and soluble oxalates, and can lead to death if enough of the plant is eaten or no medical aid is sought.  Many small rodents appear to find the spadix particularly attractive and it is common to find examples of the plant with much of the spadix eaten away.  Roots of the Arum are roughly oblong and resemble potato, brownish in colour, white inside exuding a milky sap.  A related plant, the Large Cuckoo Pint – A. italicum, which only grows on the South coast and the Channel Isles do not have the occasional dark spotting.  They have a similar coloured flower but with a yellow spadix, appear slightly later during April to June, maturing to the same cluster of poisonous red berries.

Arum starch was used for stiffening ruffs in Elizabethan times, from where it derives the name Starchwort.  In France a starch made from the roots was used as a cosmetic for the skin, and was reputed to have been used in Italy to remove freckles from the face and hands.  The roots, according to Gilbert White, are scratched up and eaten by thrushes in severe snowy seasons, and the berries are devoured by several kinds of birds, particularly pheasants.

At the bottom of the Spadix but above the male part of the flower there is a ring of hairs forming an insect trap.  Small insects, especially Owl–Midges are attracted by the plants foul odour and a raised internal temperature some 10–15 degrees Celsius above ambient.  The insects are trapped below the hairs becoming covered in pollen from the male flowers.  On escaping the insects visit other Arum plants, again becoming trapped below the hairs and pollinating the female parts of the plant.

FBCP do not advise or recommend that A. maculatum is eaten or used as an herbal remedy.   Old texts give the root of A. maculatum as edible when roasted and ground being traded under the name of Portland Sago, used for various beverages, it was also used as a substitute for Arrowroot.