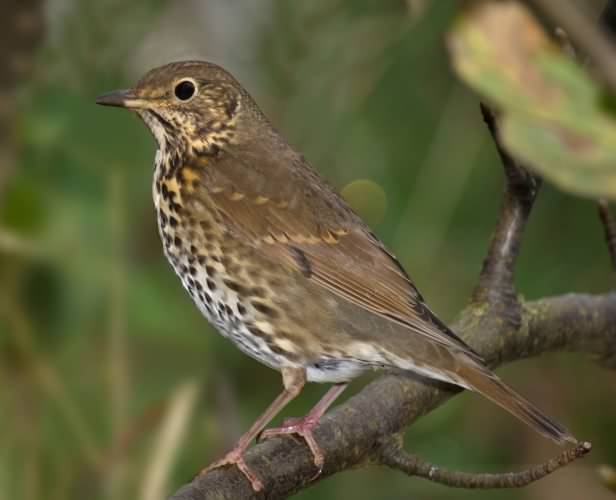 Photo ©2012 Andreas Trepte
Click any photo for a larger image 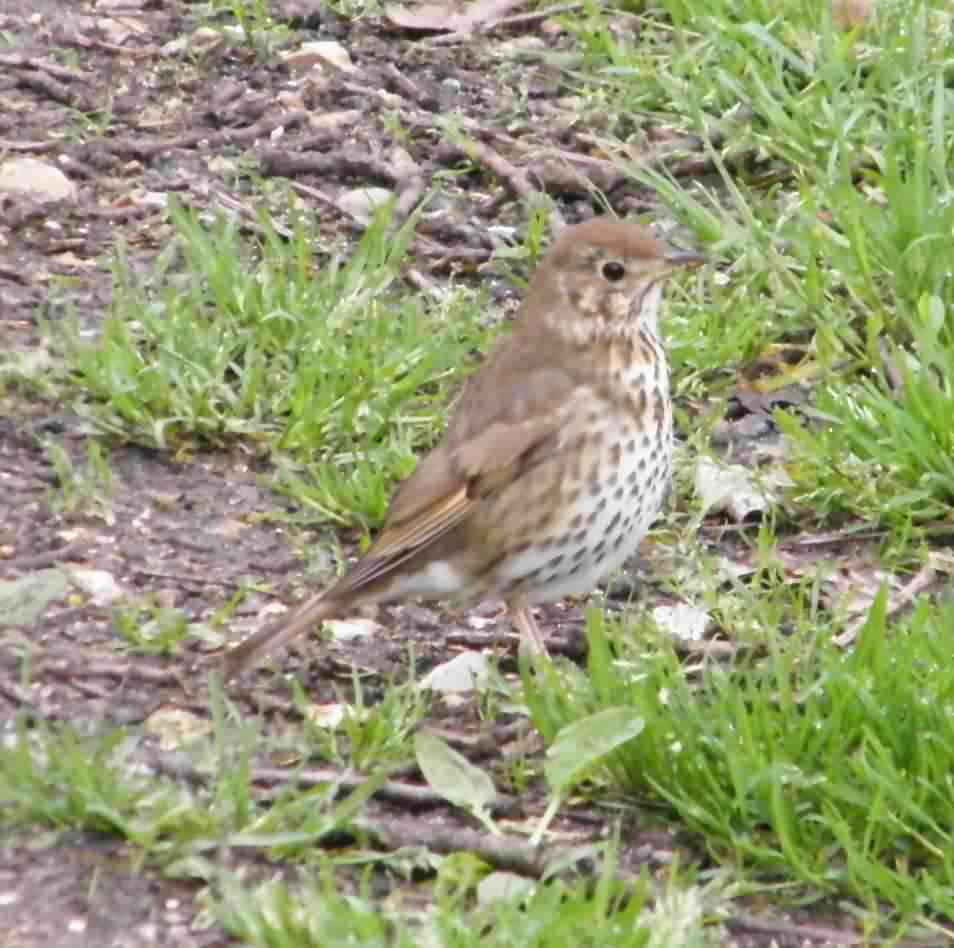 The Song Thrush is a familiar and popular garden songbird in some decline in the UK, especially on farmland making it a regional Red List species, typical lifespan is 3–5 years.  Smaller and browner than a Mistle Thrush with smaller spotting, the Song Thrush is 20–24cm (8–9.5in) in length and weighs 50–107g (1.8–3.8oz), with a plain brown back and neatly black–spotted cream or yellow–buff underparts, becoming paler underneath.  The underwing is warm yellow, bill is yellowish, legs and feet are pink.  It builds a neat mud–lined cup nest in a bush or tree and lays four or five dark–spotted glossy blue eggs.  The female incubates the eggs for 10–17 days, fledging after a further 10–17 days.  Two or three broods in a year is common but not in the north of its range.  Its repeating song distinguishes it from Blackbirds.  The Song Thrush is omnivorous, eating a wide range of soft fruit, berries, invertebrates, earthworms and especially snails, which it breaks into by smashing them against a stone or hard surface with a flick of the head.  Widespread and common over Europe but declining in the UK in many areas but locally common, it is an introduced species into Australia and New Zealand where, introduced on both the main islands, the Song Thrush quickly established itself.  As an introduced species it has no legal protection in New Zealand.

The Song Thrush is resident in the UK but migratory in the Northern and Eastern extents of its range in Europe.  Song thrushes inhabit coniferous and broad leaf forests and woodland, usually with undergrowth for cover, gardens, park and woodland edges and clearings.  The dialect names Throstle and Mavis are respectively related to the German "drossel" and French "mauvis", both mean Thrush.

The Song Thrush is a listed species in the Biodiversity Action Plan for Hampshire as a present breeding species, widespread in the UK and in Hampshire, in decline with a high threat rating.  Dependent on many habitats, a mosaic/landscape species, of ancient semi–natural woodland, pasture woodland, parkland, arable land and road verges.  It has a Hampshire SAP listing mosaic, landscape species, dependent on many habitats, high profile or indicator species.  A UKBAP species of national conservation concern, a listed HBAP species, is an HBAP species and a Birds Directive two species.