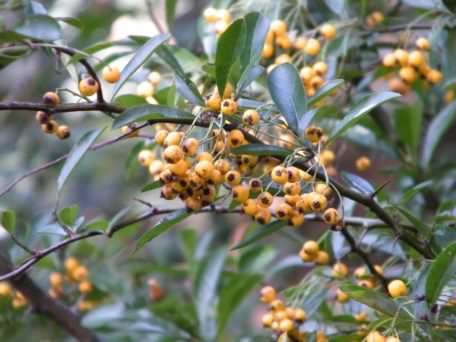 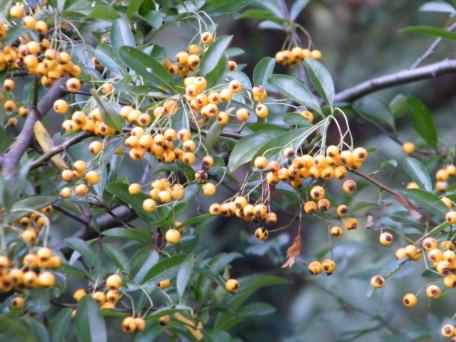 Another member of the Rose family, Pyracantha is superficially similar to Cotoneaster however Pyracantha is a prickly, spiny plant useful for hedging whereas Cotoneaster is not spiny.  It is an evergreen shrub or small tree with spiny branches bearing simple oblong glossy dark green leaves and corymbs of small white flowers followed by showy red, orange or yellow Globular berries.  Fruiting during the autumn and winter, rather than summer and autumn like most shrubs, it attracts birds when their food source is scarce who eat the berries and spread the seed in their droppings.  Botanical description for Coccinea.

Generally used as a hedging plant because of its thorny growth, with care it can produce a dense impenetrable evergreen hedge.  They have white fragrant flowers during May to June, maturing to red, orange or yellow berries in autumn and winter depending on the variety planted.  The specimen found in Brickfields Park will be a plant originating from seeds deposited by birds from a neighbouring garden.  Pyracantha grow best in full sun on fertile well drained soils but will grow in partial shade producing a more "leggy" plant as ours has.

FBCP do not advise or recommend that Pyracantha – Pyracantha coccinea is eaten or used as an herbal remedy.  Apparently the berries of Pyracantha are not poisonous as generally believed, they are very bitter to taste, being edible when cooked they are usually made into jelly.