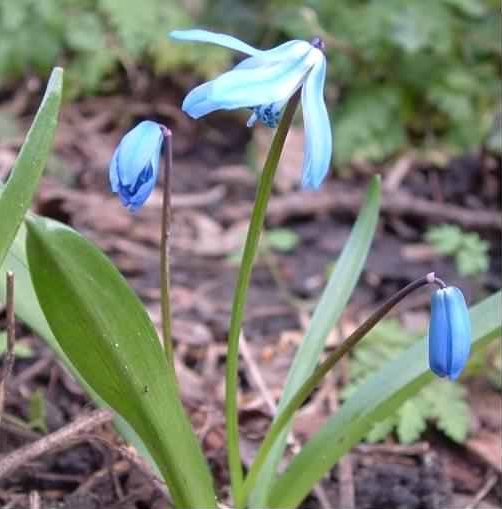 A small bulbous perennial plant to be found in dappled sunny woodland spots on nutrient and humus rich, damp but well drained soil during May to July, as its name might suggest it is native to southwestern Russia but not actually Siberia, also found in the Caucasus, and Turkey, it is an introduced species elsewhere becoming invasive in some countries.

Small bright blue nodding six petaled bell shaped flowers 20mm (0.75in) across, four to six on a spike, similar in shape to Star of Bethlehem (also found in Brickfields Park), on stalks to 10–20cm (4–8in) high.  The flowers are composed of six petals and six stamens tend to fade or be a paler colour with increasing sunlight, in bright conditions the flowers may reflex to the horizontal.  Two (rarely up to five) dark green glossy basal strap like leaves approx 15cm (6in) long.

Grows from a small bulb 2–3cm (0.75–1.25in) diameter, hardy in the correct conditions, it will readily naturalise if left alone, propagates by seed.  The flowers which have six petals and six stamens, are very similar to those of Alpine Squill S. bifolia, whose flowers are upward–facing, unlike the nodding flowers of Scilla siberica.  Siberian Squill has gained the Royal Horticultural Society's Award of Garden Merit and is usually planted for its similarity to Bluebell.  Siberian Squill cultivars may have white (ssp. Alba), pink or blue–violet flowers.