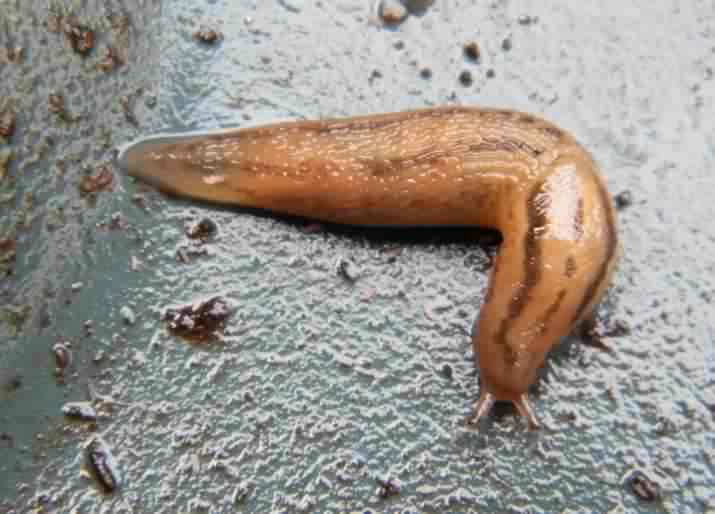 The Leopard Slug – Limax maximus, literally "great slug", is one of our larger pulmonate (air–breathing) slugs.  Like the Black Slug, it is native to the UK and Europe and an introduced species elsewhere in the world. Adult slugs can be up to 10–20cm (4–8in) in length, they are generally a light greyish or brown with darker spots, blotches and stripes, although the colouration and patterning is very variable.  Found in many differing habitats; forests and cultivated areas near settlements, hedges and bushes, parks, inner city green areas, cemeteries, also humid cellars, buildings and barns.  They can live for 2–3 years.

They are usually active at night but may also be seen in daytime during wet, warm overcast weather or in dark areas.  Usually found under stones, rubble, deadwood as well as in dark wall crevices.  Partially carnivorous they feed on carrion, but also on other slugs and their eggs possibly leading to a decrease of harmful slug species, sometimes found in compost bins they are regarded as a beneficial species that should be protected in garden areas.

Their mating was featured in David Attenborough's nature program "Life in the Undergrowth"". Whilst hermaphroditic two leopard slugs, crawl one after the other, the back one almost touching the front one.  Both crawl towards an overhanging part of a wall or tree branch from where they "rope" down on a thick slime thread about 40cm (16in.) long.  They mate extending their penes and entwining them, where the spermatophores are exchanged. After mating one slug returns up the slime thread, partially eating it during the process, while the other one drops to the ground.  They then lay up to 200 large clear eggs.