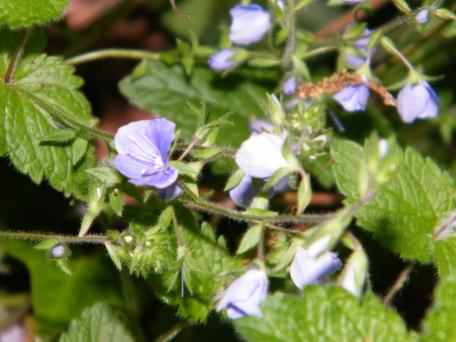 Germander Speedwell is a delicate prostrate sprawling grassland perennial of damp woodlands, field boundaries, scrub and shaded hedge banks, native to the UK and Europe, it is widespread and common throughout the UK except for the far north, equally at home on heavy clay or loamy soils.  Long oval dark green hairy leaves to 25mm (1in) long are deeply toothed in opposite pairs on prostrate hairy stems with few branches, which will root at the nodes.  The leaves are superficially similar in pattern to those of various Stinging Nettles but are more oval and much smaller.  The white centred violet or lilac flowers are 8–12mm (0.3–0.5in) across, consist of four petals with 7–9 dark purple streaks, grow on hairy stems, three blue stamens with purplish anthers.  It flowers from March to August.  It is an introduced alien species in North America and a few other countries.

FBCP do not advise or recommend that Germander Speedwell – V. chamaedrys is eaten or used as an herbal remedy.    Leaves of Germander Speedwell have been used in the past as a tea for bronchial conditions and asthma and cardiovascular conditions, its common name of "Speedwell" may come from this medicinal usage.  Another explanation is that it was believed Germander Speedwell was good luck for travellers, and wearing it in your buttonhole would "speed you well" on your journey.

The flower is similar to that of Thyme–leaved Speedwell – V. serpyllifolia, but the leaves of this plant are much smaller, heart shaped, smooth and without the notched edges, the flowers are also much paler and almost white.  Brooklime – V. beccabunga also has very similar dark blue white centred flowers to Germander Speedwell, but again the leaves show the difference being non hairy, smooth, oval with faintly almost absent notched edges on thick stems and flowers that are mainly blue.