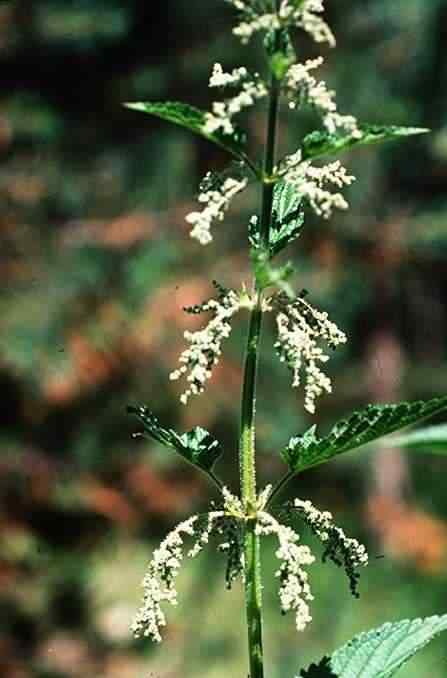 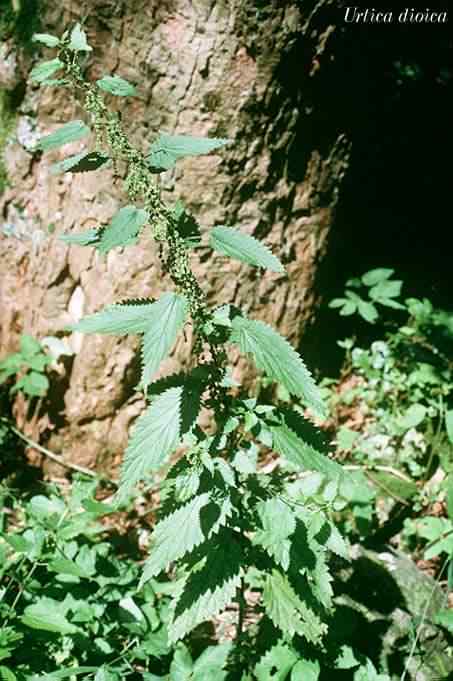 The Stinging Nettle is a herbaceous perennial plant native to Europe, Asia, northern Africa, and North America, growing to 1.5m (5ft) from far reaching yellow coloured rhizomes.  Erect robust stems and strongly serrulate leaves are both covered in stinging hairs or trichomes (although not all Nettle species sting), are dark green and oval pointed, being found in alternating opposing pairs on the stem.  These hollow stinging hairs on the leaves and stems act rather like hypodermic needles, injecting histamine and other chemicals that produce a stinging sensation when brushed against.  When brushed against, the hairs are broken piercing the skin injecting Formica acid and Histamine causing inflammation and a burning sensation which lasts for up to 12 hours.  A Nettle species unique to New Zealand, Urtica ferox which apparently contains an additional neurotoxin component is believed to be more toxic than other Urtica species and is said to have caused the deaths of numerous animals and possibly one human.

Numerous small Green/Brown flowers appear in June to October as hanging catkins, with male and female on different plants as the dioica part of the name suggests (dioecious).  It grows well on waste ground and disturbed soils favouring slightly damp areas.  Stems of the plant are very fibrous and have apparently been used to make a rough cloth in the past.  The old saying - "Grasping the Nettle" comes from the belief that firm handling of the stinging parts of the plant produces less or no pain.  It is said that the Stinging Nettle was brought to the UK by the Romans but there is no firm evidence for this.  The plant has a long history of use as a source of medicine, food, and fiber.  Parts of the Nettle may be used to extract dyes, producing yellow from the roots, or yellowish green from the leaves.)  Nettles are the food plant for several moth and butterfly species including the Peacock and Small Tortoiseshell butterflies, and the Angle Shades and Buff Ermine moths.

FBCP do not advise or recommend that Stinging Nettle – Urtica dioica is eaten or used as an herbal remedy.   U. dioica has been used in traditional herbal remedies as tea or fresh leaves for various disorders.  The young leaves are apparently edible as a good leaf vegetable with a flavour similar to spinach mixed with cucumber when cooked, and is rich in vitamins A and C, Iron, Potassium, Manganese, and Calcium.  Traditionally Dock leaves may be lightly crushed and rubbed on to provide relief from the symptoms of Nettle sting.