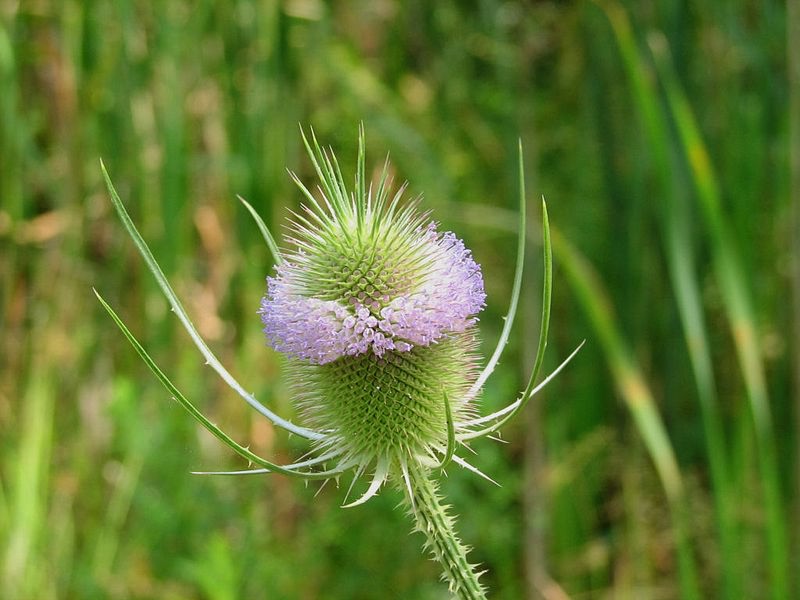 Picture ©2005 Dger
Click any photo for a larger image 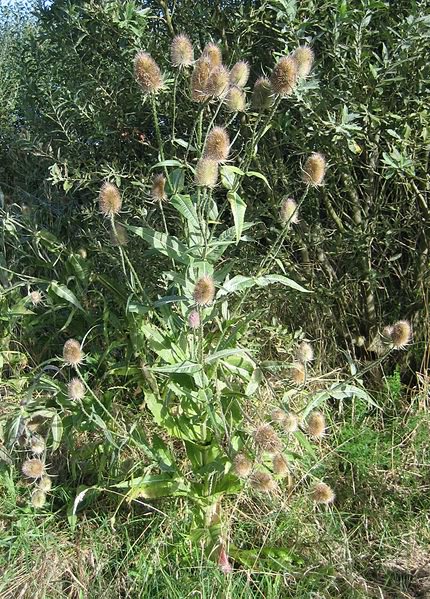 Teasel is an herbaceous biennial plant growing to 1–2.5m (3.3–8.2ft) tall.  It is native to Europe, Asia and North Africa, and regarded as an introduced noxious weed in America, southern Africa, Australia and New Zealand.  Easily identified from their overall size and prickly stem and leaves, the inflorescence is a ovoid array of tiny lavender flowers up to 4–10cm (1.6–3.9in) long and and 3–5cm (1.2–2.0in) wide which dries to a cone of spine–tipped hard bracts, with a basal whorl of long spiny upward curving bracts.  In the inflorescence the first flowers begin opening in a band around the middle, then open sequentially toward the top and bottom, forming two narrow bands as flowering progresses.  The dried head with a multitude of small 4–6mm (0.16–0.24) in seeds maturing in mid autumn are an important winter food resource for some birds, notably the European Goldfinch.  Teasels are often grown in gardens and encouraged on some nature reserves to attract birds.  The genus includes about 15 species of tall herbaceous biennial plants.  The genus name is derived from the word for "thirst" and allegedly referring to the cup–like formation made where sessile leaves merge at the stem, which can become filled with rainwater.

As a wild plant Teasel is D. fullonum or D. sylvestris, the cultivated plant is generally recognised as Dipsacus sativus.  In the past Teasel was used to raise the nap on cloth and fabrics, particularly wool.  The dried flower heads were attached to spindles, wheels, or cylinders, called teasel frames to raise the nap, I.E. to "tease" out the fibres.  Teasels were largely replaced by metal cards, which could be made to a uniform size and did not require the constant maintenance that teasel heads need.  Some weavers still prefer to use teasels claiming the result is better for the process, metal cards can rip the fabric, a teasel will break thereby saving the cloth.

FBCP do not advise or recommend that Teasel – Dipsacus fullonium is eaten or used as an herbal remedy.   A number of medicinal properties have been claimed for the teasel, although not proven, with the cure of Lyme disease, as an antibiotic, improving circulation, a cure for warts and as an eyewash all being mentioned.