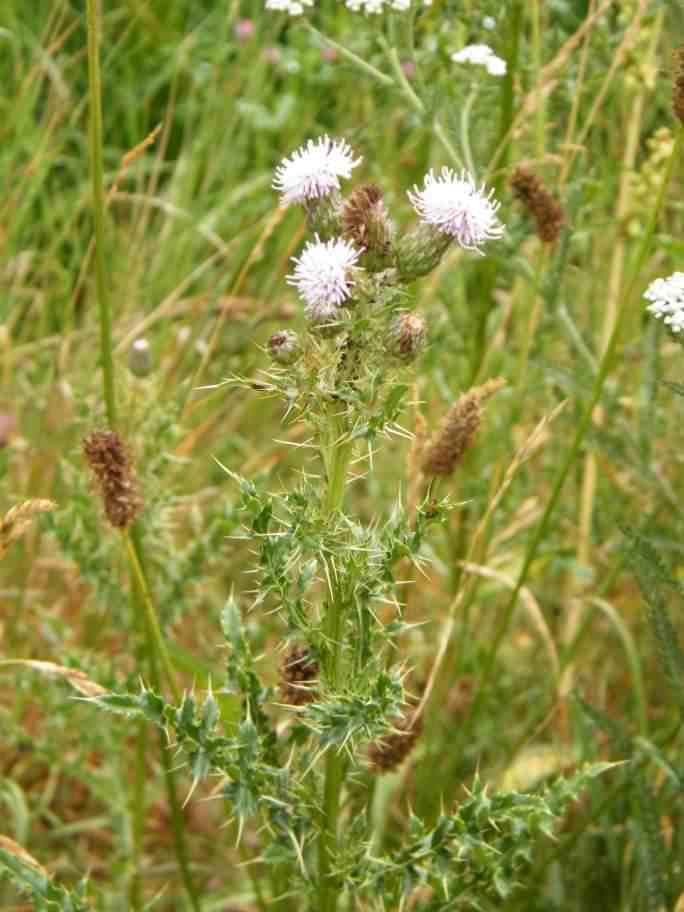 Prescribed in the Weeds Act 1959 as an "injurious weed" which must be controlled in agricultural land, a creeping biennial with upright stems growing to 1.5m (5ft), widespread and very common plant of disturbed ground, grasslands, roadsides, forest clearings and gardens.  Seedlings form small rosettes with a pair of opposite simple unstalked oval light green leaves, another pair of true leaves arranged at right angles having wavy edges, weak spines and hairs or bristles on the upper surface.  Upper surfaces are quite glossy or waxy, whilst undersides are downy.

Adult plants form an extensive root system, developing a tap root to about 3m (9ft) in depth and lateral roots to about 5m (16ft).  New plants develop from the lateral roots in the spring, enabling the plant to quickly colonise and area.  Flowering stems extend 30–100cm (1–3ft) in height from shoots which emerge out of the rootstock each spring.  These stems lack spines, wings, furrows or ridges.  Usually grows near to Nettles, providing food for butterflies, other insects and birds, rich in nectar.

The leaves are elongated and narrow with a wavy and strongly spined margin.  There are separate male and female plants (dioecious) which can be distinguished by their different flower structures.  Loose clusters of purple flower heads, each between 10–25mm (0.4–1in) long and around 1cm (0.4in) wide, are borne on the branched stems, from June to September each year, dying back after producing seeds but to remaining disperse them.

As listed in the Weeds Act 1959 allowing the seed to disperse is an offence.  Control is usually by treatment with a systemic herbicide Eg. Roundup (Glyphosate) or by digging or ploughing to bring the root system to the surface where drying will kill it.  With established plants remove as much of the root system as possible being careful not to make the problem worse by spreading parts of the system.  This may need to be done several times as the roots can lie dormant for some years.  Arvense meaning of cultivated fields.