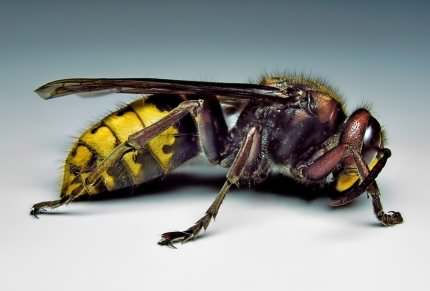 This species can sting.

The Hornet is a member of the Vespidae family which superficially looks like a Common Wasp but one on "steroids", being at least twice the size.  Hornet queens are about 3.5cm (1.4in) long whilst the workers are about 2–3cm (0.8–1.2in) long.  They are a light brown colour, quite hairy with yellow and brown patterning on the abdomen which in females has six segments whilst that of the male is seven.  The number of antennae segments also varies between the sexes, males have thirteen segments, females have twelve.

A European species it can be found during May to September, from the UK to Japan in parks, woods and forested areas, it is an introduced (in the mid 1800's) and established species in North America where it is regarded as a forest species, also in Canada where it is commonly called the "Brown Hornet" or "Old World Hornet", also in Asia.  Like wasps, Hornets also sting although it is only the females that do so as males do not possess a stinger, generally they are a calmer species than wasps and are less likely to sting unless provoked.  Their sting is said to be similar to a wasp in potency and can occasionally lead to Anaphylaxis.  In the UK they are the largest of the British social wasps and like the Common Wasp Vespula vulgaris they build papery nests of chewed wood fibers in dark places E.g. hollow trees, roof spaces, wall cavities and chimneys.  They are carnivorous feeding on large insects, primarily other wasps, moths and bees.  Hornet larvae are fed a pulp of masticated insects, but may supplement their diet with tree sap and windfall fruit.

In some European countries the Hornet has suffered a marked decline from fear of the species and destruction of nests, becoming an endangered species.  In Germany it has been illegal to destroy a Hornet or its nest since 1987, with a fine up to €50,000.  There are several geographic colour forms of the Hornet found worldwide.