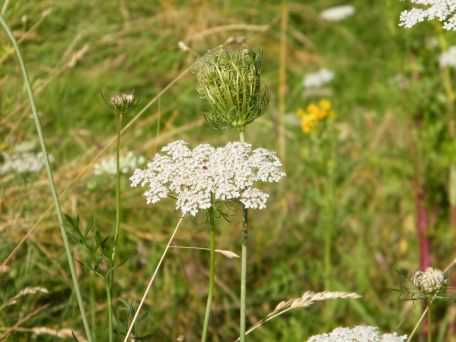 Widespread throughout the UK perennial of rough grassland growing from a bitter taproot.  Common around coasts, it also grows in dry meadows, field boundaries and on slopes.  Native to Europe and southwest Asia, it is a naturalized plant North America where it is listed as a noxious weed, and Australia, indeed worldwide.  D. carota ssp. sativus is the cultivated orange vegetable for human consumption eaten raw or cooked, also an important fodder crop.

Wild carrot is an herbaceous, erect, branched, roughly hairy growing to 30–60cm (12–24in) with fern like leaves which are 2/3 times pinnate (tripinnate) with narrow leaflets.  Flowers arranged as an umbel are pinkish in bud but white when fully in flower, occasionally yellow, appearing from June to September.  Often there is a small red flower in the centre of the umbel which is attributed as being an insect attractor.  The flower head matures to a dense congested cluster of nut like brown seeds.

Similar to Hemlock – Conium maculatum which is poisonous.  Wild carrot leaves in extreme cases may cause photo–dermatitis to some people.  The common name of "Queen Anne's lace" is said to refer to Queen Anne of Great Britain and the dainty flowers resemblance to lace.  The little red flower in the centre is thought to represent a small drop of Ann's blood droplet having pricked her finger whilst making the lace.