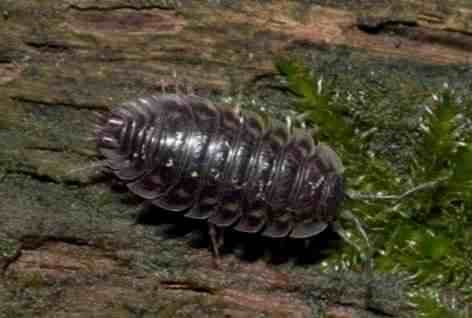 They have an eleven segment exoskeleton and fourteen jointed limbs and grow to around 16mm (0.65in) long, the segmented exoskeleton gives the Wood Louse the flexibility to be able to curl into a ball to protect itself from danger.  Typically a glossy greyish colour with irregular light patches, but yellow and orange forms are also found.  There are currently two recognised subspecies of the common Wood Louse in the UK, O. asellus occidentalis and O. asellus asellus.  Length: 16 mm.  The exoskeleton "moults" as it grows, the moult takes place in two stages with the back half being lost first, followed two or three days later by the front.

The Wood Louse is a herbivorous detritivore found in dark, damp places but not watery habitats throughout the world in many varying species, they feed on decaying leaf and plant matter contributing to the decomposition of waste material.  The Wood Louse has a lifespan of around two years and it is thought that there are over 3,000 different species of Wood Louse around the world.  Wood lice are predated upon by a number of animals including toads, centipedes, spiders, millipedes and wasps.

The female Wood Louse keeps around 24 eggs inside a brood pouch or marsupium, on the underside of her body, hatching after a few days into small, white offspring.  Female Wood Lice are also capable of parthenogenetic reproduction.  Woodlice in the genus Armadillidium can roll up into an almost perfect sphere as a defensive mechanism, giving the Wood Louse some of their common names, most woodlice, however, cannot do this.  Wood lice can be mistaken for Pill millipedes, however they have two pairs of legs per body segment instead of one pair like all Isopods.  Pill millipedes also have thirteen body segments, whereas the Wood Louse has eleven.  Woodlice are generally considered to be a beneficial species for their role in producing compost and overturning the soil, however they have also been known to feed on cultivated plants, such as ripening strawberries and tender seedlings.