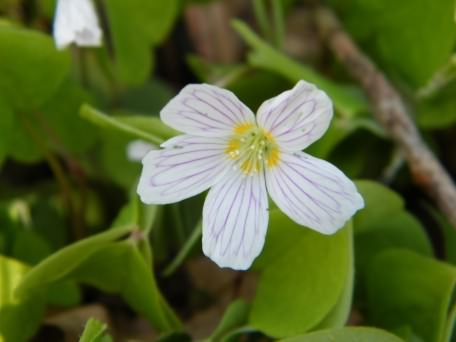 A small perennial plant with three part leaves and heart–shaped leaflets often confused with Clover or Shamrock when not in flower.  The leaves fold down at night and in strong sunlight.  Found in shady spots in deciduous woods and hedgerows from late March to July.  Closely related the Geranium family and although called a Sorrel it is not related to true Sorrels.  The leaves are said to have a pleasantly acid or lemon taste sometimes being eaten as a spring salad.  Sorrel comes from a French word for sour, and both botanical names Oxalis and acetosella refer to this acidity, Oxalis from the Greek "oxys", meaning sour or acid, and "acetosella", meaning vinegar salts.

The small unperfumed flowers on stems 5–20cm (2–4in) high, are a white or delicate pink, finely veined with purple to deep pink, about 12–15mm (0.5in) long.  Five sepals, five petals with rounded tips, ten stamens all with anthers, one pistil with five styles.  Slender and leafless scape.  Flowers mature to a small seed capsule which rupture explosively scattering the seeds.  There is also a second flower type hidden amongst the leaves, their undeveloped petals never opening.  These self–fertilised cleistogamous (or hidden flowers) scatter their seeds in the same way as the familiar white–petaled ones.  Range; Canada, North America, Northern Europe.

Called Cuckoo's meat because in English folklore it was supposedly eaten by Cuckoos to clear their voice and is also in flower at the same time of year when Cuckoos are singing.  The folding action of the leaves was also used to predict rain.  Wood–sorrel is included in Ancient Woodland vascular Plant Indicator lists.  Other common names are - Wood Ash, Bird's Bread and Cheese, Cups and Saucers, Whitsun Flower, Laverocks.

FBCP do not advise or recommend that Wood Sorrel – Oxalis acetosella is eaten or used as an herbal remedy.   Wood Sorrel has been used medicinally for fevers, a skin lotion and a gargle for mouth ulcers.