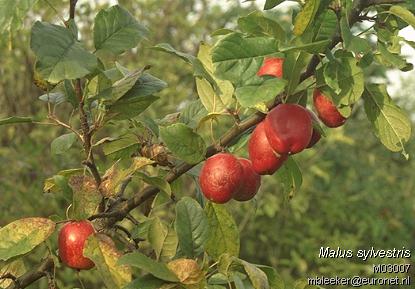 Photos ©2002 Marco Bleeker
Click any photo for a larger image 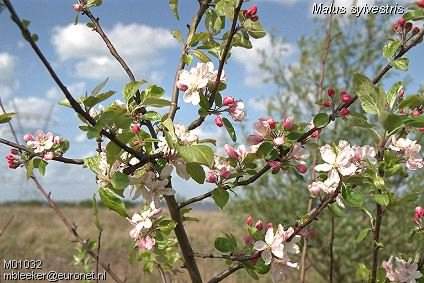 Familiar small thorny deciduous hedgerow tree or bush growing to 10m (32ft) and found in most of the British Isles except Northern Scotland.  Common in Oak woods and hedges.  Young branches can be hairy or woolly, leaves oval and pointed having finely serrulate edges.  Flowers of five pink–white petals appear May to June ripening to small green fruit in late summer, that are extremely sour but make good jelly by themselves or with Blackberries (Bramble) or Rowan berries.  Crab Apple wine is reported to be potent.

Hard close grained wood used for wood carving, inlays, mallets and screws.  Good firewood with pleasant aroma.  Orchard Apples are derived from M. sylvestris and other species.  Cultivated varieties M. x domestica do not have spiny branches but do have hairy leaves on the underside.  They may have been an ancient hybrid form.

The seeds of all Apples are toxic.   The seeds contain the chemical Amygdalin which is a cyanide based compound which decomposes to produce the poison Hydrogen Cyanide.