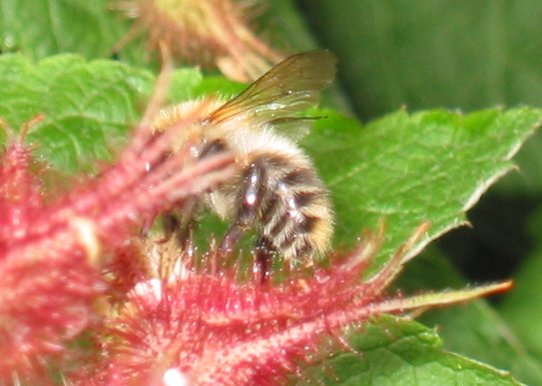 The Brown–banded Carder Bee is is a medium–sized bumblebee found in most of Western Europe west of Russia, with the exception of Ireland and Iceland, in the UK it is restricted to southern England's chalk lands.  Queens and workers usually have a broad, dark brown band near the front on the upper side of a beige abdomen, sometimes missing in some workers. There may be a few black hairs on the thorax near the wing–bases.  Males are similar to queens, but they lack stings and have longer antennae.  This dark brown banding gives the bee its common name.  Queens at 16–18mm (0.6–0.7in) are generally larger than workers 10–15mm (0.4–0.6in).  The thorax is usually a yellow orange or Ginger colour on top, with beige sides but may be dark brown.

Usually seen flying from about May to September, the queen emerges from hibernation in the spring and makes a quite small nest for around 100 bees on the ground usually among grass tufts.  Food plants visited are various including Red Clover - Trifolium pratense, Knapweeds and Vetches.

Habitat loss due to intensive farming is a threat, but being near the edge of their latitudinal range they are not well adapted to local conditions and therefore are sensitive to habitat changes, especially loss of unimproved grassland meadows.  Improvement  of pastures with a consequent loss of wild flower diversity combined with heavy grazing have lead to the Brown–banded Carder Bee being in decline almost everywhere.  They are now mostly associated with brownfield sites and coastal areas.

The Brown–banded Carder Bee is listed in the Biodiversity Action Plan for Hampshire as a present species in decline.  Dependent on many habitats, a mosaic/landscape species of unimproved neutral dry grassland, hay meadows, lowland calcareous grassland, maritime cliffs, shingle, salt marsh or coastal grazing marsh.  A SAP exists for the Brown–banded Carder Bee as a high profile or indicator species, severely threatened, it is also a UK Biodiversity Action Plan species.