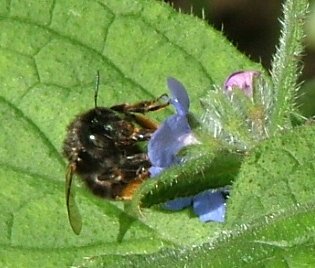 Although the Red Shanked Carder Bee is sometimes found in urban wasteland and gardens, this is a declining species that is strongly affected by the loss of habitat.  Because it nests in old mouse nests, B. ruderarius is very dependent on more extensive areas of open grassland and scrub that can support a good population of mice and voles.  The preferred flowers visited are legumes such as Clovers, Trefoils, Vetches etc, Knapweed and labiates such as Red Dead–nettle and White Dead–nettle, Self–heal etc.  The Red Shanked Carder Bee is a common species in the south of England and a rather a much rarer species in Western Scotland.

Both Queens and workers are all black with an orange–red tail and orange hairs (pollen baskets) on the hind tibiae (hind legs).  The abdomen is relatively short (nearly as wide as long) which helps to separate it from the Red–tailed Bumblebee which has a much longer abdomen and black pollen baskets.  The face and the tongue are long.  The male has an orange tail and greenish yellow hairs amongst the black hairs on the face and in thin bands on the thorax.  The species makes a nest containing a colony of 50–100 individuals, usually above ground in old patches of dead grass or mosses.  Queens are occasionally seen in the second half of April, most become active in May.  The queen is 16–18mm (0.6–0.7in) long, reaching a wingspan of about 32mm (1.3in), workers and drones are a bit smaller.