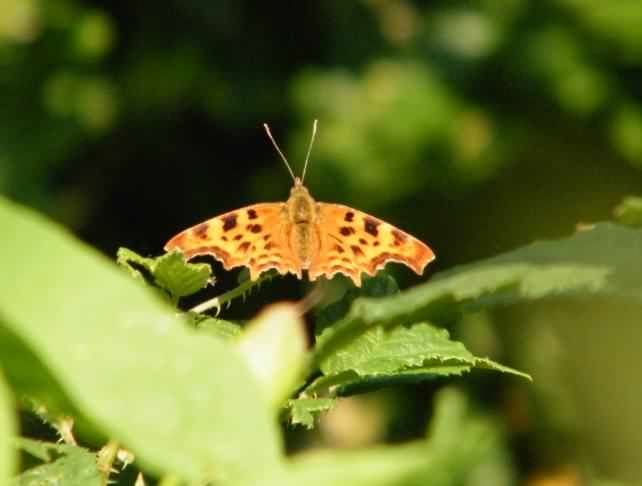 Resident in the UK, the Comma is common and locally abundant in Europe except in the far North, it has a wingspan of 40–50mm (1.5–2in) with distinctive raggedy edged upper wings, its under wings are a smoky brown with a white "comma" mark, from which the butterfly gets its name.  Upper wings orange–brown with dark markings.  On emergence from hibernation they lay eggs from which two types of butterfly emerge.  The first is the commonly seen brown and orange type with ragged wing edges who make ready for the next winters hibernation.  The second takes less time to develop and hatches earlier during May to June, they differ in wing shape and colouration and are named P. f. hutchinsoni.  They reproduce in the summer with the next generation joining the hibernating adults of the first type.

caterpillars live singly on Stinging Nettles, Hop, Gooseberries, English Elm and Hazel leaves.  The first third of the caterpillar body is a russet colour, the remainder being white and the underside reddish and is armed with spines, the chrysalis hangs head downwards.  A very variable species usually related to the shape of the "c" pattern on the underside of the rear wing.  Can be subject to large population swings.  Adults during March to September.  Several colour varieties, in two to three generations from May to October, hibernates and reappears in the spring.  Found at forest margins, glades and gardens.