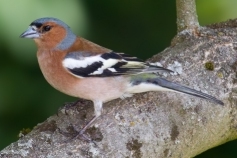 A very colourful Finch species being one of the more common bird species in the UK with an estimated population of over four to five million pairs.  Males have a slate blue head and neck, a face and breast varying between pink and deep red, and a gray blue tail.  The female is less colourful being a drab yellowish brown with lighter undersides.  Both sexes have white bars on the wings and white markings to the tail, male colouration can vary markedly with areas of the UK.  It is seen all year round in the UK, with the indigenous population increasing over the winter with migratory birds from Northern Europe, males tending to the Northern areas of their range and females to the South.

Growing to about 14–18cm (5.5–7in) with a similar wingspan and weighing 20–25grams (0.7–0.9oz) they are widespread in the UK and Europe right through to the Middle East, western Russia and Northern Africa.  Mainly found in woods and forests, hedgerows, urban parks and gardens.  They feed on seeds and fruit but unlike other finches, their young are mostly fed on regurgitated larvae and insects by both parents.  They breed early building a sturdy cup shaped nest of Grasses and lichens preferring Hawthorn, Elder and Blackthorn, incubating a clutch of 4/5 pale white, red/brown blotched eggs for 11–13 days, raise one brood a year.  After the breeding season the can form gregarious groups with other seed eaters, Eg. Bramblings and Greenfinches.  In continental Europe they have been kept as songbirds.