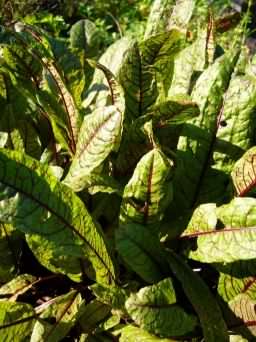 Wood Dock is a common plant which has sporadic growth in moist ground of woodland, path sides, waste grounds and meadows to 1m (33in) tall June to August.  Only found at the base of the plant the leaves are long, narrow and pointed, rounded at the base with new leaves being edible raw or cooked.  Whorls of flowers comprising three petals enclosing a fruit grow in clusters along the stem, one of the petals has a large tubercle almost as wide as itself whilst the remaining two petals may have very small tubercles or none at all.  The Inflorescence are less dense than those of Broad Leaved Dock or Curled Dock, similarly the leaves not as bulky as Broad Leaved Dock but also not as narrow as Curled Dock.

FBCP do not advise or recommend that Wood Dock – Rumex sanguineus is eaten or used as an herbal remedy   It can be used as a wild leaf vegetable, can be used a substitute for spinach, either raw or cooked, however, as the leaves get older they become rather bitter.  Dock leaves are a traditional remedy for Nettle, and suitable larger docks often grow in similar habitats to the Common Nettle.