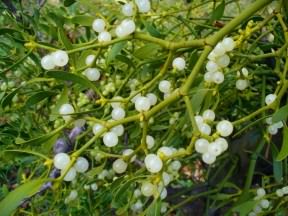 Photo ©2009 H. Zell
Click any photo for a larger image 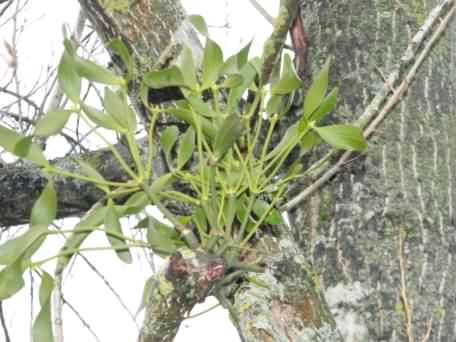 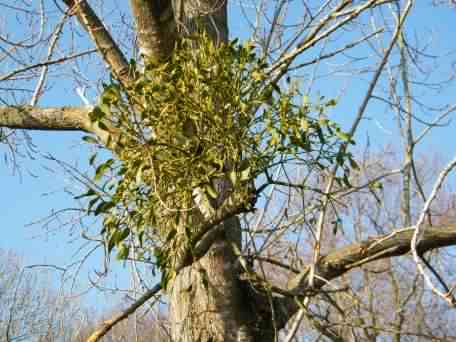 A well known parasitic evergreens for its supposed medicinal and perceived magical properties.  Locally common in the UK, European Mistletoe as it name suggests is the only Mistletoe species native to Great Britain and Europe.  It grows on woody hosts in a variety of habitats, extending from the tropics to temperate regions.  Commonly found on Apple trees, also on Lime, Poplar, Blackthorn, Hawthorn, Rowan and Willow.  Heavy Mistletoe infestation on a host can kill it.  Lanceolate smooth–edged evergreen leaves in pairs along the woody stem, with white waxy berries in dense clusters of two to six.  Seeds in the berries are dispersed by birds either by being voided having been eaten or when the sticky pulp of the berries is later wiped off the birds bill thereby depositing the seed on branches or twigs.  Commonly eaten by Mistle Thrushes and Blackcaps.  Mistletoe is a hemi–parasite, with evergreen leaves that have some photosynthetic properties but mainly using the host plant for water and nutrients.  The seeds germinate on the branch of a host and in its early stages of development is an independent plant.  Later it forms a haustorium that penetrates the hosts tissues and takes water and nutrients.

FBCP do not advise or recommend that European Mistletoe – Viscum album is eaten or used as an herbal remedy.   Mistletoe leaves, stems and berries can be poisonous to humans if ingested, and pets such as dogs are also at risk when mistletoe is brought indoors.  It causes acute gastrointestinal problems including stomach pain and diarrhoea.  Mistletoe leaves are used by herbalists for treating circulatory and respiratory system problems and Mistletoe extract has been linked to the treatment of cancer but available clinical evidence does not support claims of anti–cancer effect.  Several substances including the sticky juice of Mistletoe berries have been used as an adhesive, commonly called "bird lime", to trap small animals or birds.  Used at Chrismas time as a festive decoration, it may remain hanging throughout the year, allegedly often to preserve the house from lightning or fire, until it is replaced the following Christmas Eve.