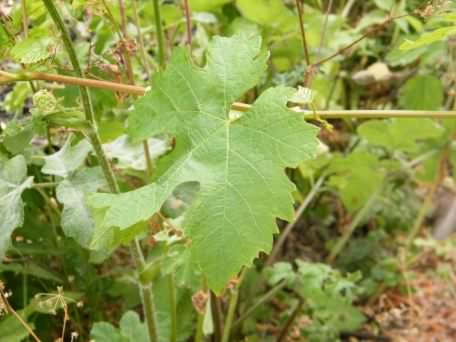 A plant with scrambling growth of around 80 recognised species in the genus now found in most countries due to commercial production of grapes for consumption and viticulture.  Palmate five lobed light green leaves rather reminiscent of Maples interspersed with spring like tendrils branching off the main stems to attach and entwine around other plants and structures enabling the plant to gain height as it is not initially self–supporting.  With age the plant can become quite substantial and attain some height.

The grape vine Vitis vinifera is thought to have originated in southern Europe and Asia.  It now occurs in widely different geographical areas and with large diversity and some specialisation to local geographic conditions.  Some ornamental varieties have gained the Royal Horticultural Society's Award of Garden Merit

In commercial production they are mostly hermaphroditic with the small flowers appearing as inflorescences, maturing into edible fruit or grapes which can be variable in colour and size according to the variety.  This growth and production of fruit is usually only based on the previous year's growth, so the plant gradually gets bigger or in commercial viticulture is pruned back each year to encourage new growth for the next fruiting season.  Wild grape vines are Dioecious.

Grapevine leaves are food plants of several caterpillars of Lepidoptera including some found in Brickfields Park.  The Willow Beauty, Garden Dart and Angle Shades are all listed, however, given the scarcity of Vitis species within the park it is unlikely that our Lepidoptera actually use it.