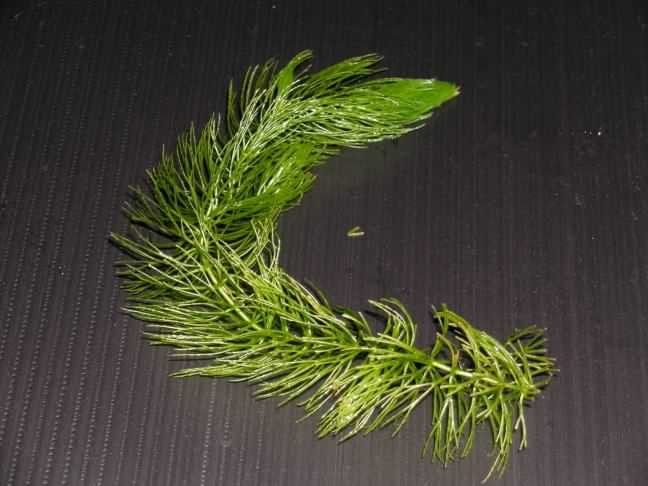 Leaves of this rootless submerged aquatic plant are stiff a bright olive green and sessile in whorls of 5–12 for each node, 19–32 (0.75–1.25in) long, they curve upward becoming more densely packed towards the tip resulting in the "Coontail" appearance.  Stems are smooth and fragile, their length varying with water depth with the lower part anchored in the bottom sediment but can reach 4m (13ft).  Very small (2mm, 0.08in) green flowers of eight or more greenish–brown petals appear from June to September, both male and female forms in the leaf axils on the same plant (monoecious).

The plant is a good oxygenator and can be found in neutral or alkaline waters from very slow flowing water to lakes, ponds and marshes over most of the planet, but less so in Northern climates.  Propagation by a small 4–7mm (0.15–0.3in) seeds or by division with very small pieces of stem growing into a new plant.  The seeds are eaten by some waterfowl.  The plant can form turions, buds that sink to the bottom of the water body to form new plants in the spring.  It is an important plant habitat species for many aquatic invertebrates and can often be found with Elodea and Potamogeton species.

Its name is derived from the Greek "keras" meaning horn and "phyllon" for leaf and demersum, from the Latin "demersus" for "under water".  Common name derived from the foliage shape and Anglo Saxon "wort" meaning, "plant".  It excretes toxins affecting algae and can efficiently inhibit algae growth, it is sometimes used in aquatic tanks for this purpose.  The genus has two main species; Common Hornwort – Ceratophyllum demersum, and Tropical Hornwort – C. submersum, over thirty other species are listed, which may be variants of the two main species.  Hornwort is a weed Tasmania and Australia, and an unwanted organism in New Zealand.