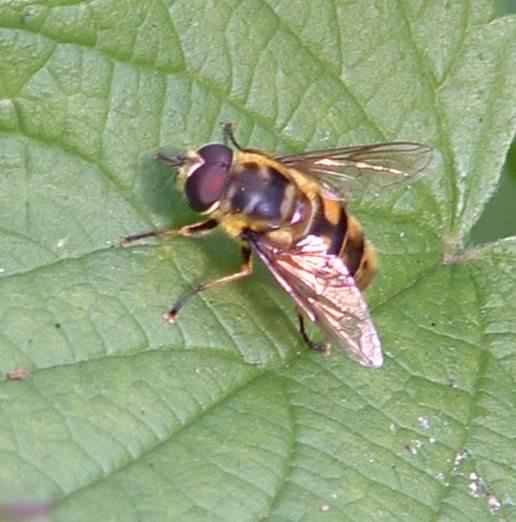 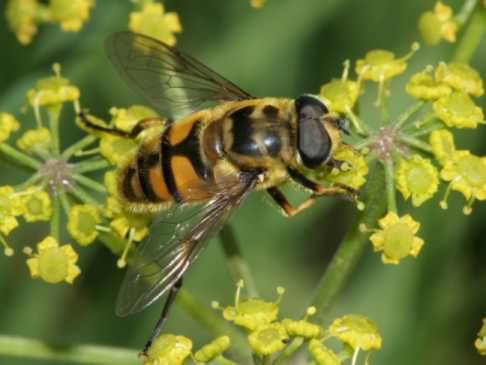 This species was originally incorrectly identified as the Megasyrphus annulipes hoverfly, subsequent information from Mark Mitchell has corrected this error, many thanks Mark.

Identified by a distinctive pattern on the thorax which resembles the Batman logo or a blackened skull, they are native and common to the UK and Europey.  With a body length of 10-14mm (0.4-0.55in) and a wing length of 7–12mm (0.275-0.475in), they are a similar size to Eristalis tenax but can be rather variable in size and colour.  The abdomen is black with yellow patterning, two light bands to the thorax, interrupted with a black central smudge, legs are a pale yellow and black.  It gets it common name from the black marking on the thorax which looks like a face or death mask.  The body appears almost furry as it is covered with golden yellow hairs.

Found in deciduous woodlands and woodland edges, forests, fen carr, farmland, parks, and gardens.  The larvae are known as rat-tailed maggots as they have a long breathing tube at the end of the body that looks rather like a tail.  They develop in the stagnant water found in rotting tree stumps, feeding on bacteria in organic waterlogged detritus.  Adults may be seen on flowers from May to October visiting many different species including umbellifers, Chestnut, Convolvulus, Crataegus, Spindle, Meadowsweet, Ivy, Rhododendron, Bramble, Elderberry, Goldenrod, Rowan and Guelder rose.