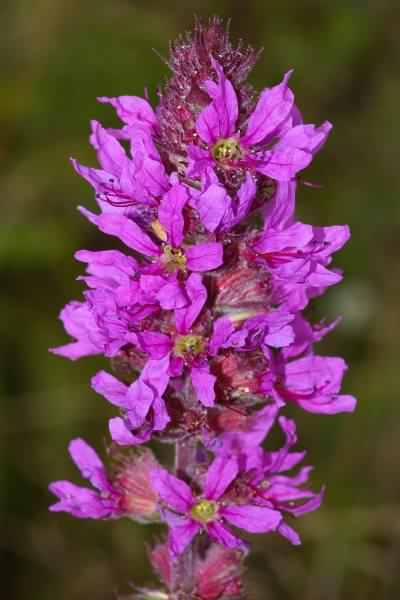 Lythrum salicaria is an herbaceous wetland perennial plant, growing to 1–2m (3.2–6.5ft) tall, forming colonies with numerous erect four sided stems growing from a thick mat of roots that can spread over large areas.  It is native to the UK, Europe and Asia in ditches, roadsides, wet meadows, damp areas, marshes and lakes sides.  The stems are a reddish–purple and have square cross section.  Downy sessile lanceolate smooth edged leaves are 3–10cm (1.2–4in) long and 5–15mm (2–6in) wide, and arranged opposite or in whorls of three.

The showy purple flowers are 10–20mm (0.4–0.8in) diameter, with six petals and 12 stamens are clustered tightly in the axils of bracts or leaves.  The flowers which are insect pollinated have stamens and styles of three differing lengths meaning they can only be pollinated by one of the other lengths ensuring cross–pollination between different plants.  Flowering proceeds throughout the summer but once pollinated the flowers develop a small 3–4mm (0.1–0.16in) capsule containing numerous minute seeds.

Introduced into North America in the 19th century by bee keepers for its abundance of flowers and nectar, Purple–loosestrife is now an invasive weed, forming impenetrable stands.  Also introduced into temperate New Zealand where it is widely naturalised, and listed as an invasive species in Canada where two leaf–eating beetles, Galerucella calmariensis and G. pusilla have been approved for release to combat the plant.

It should not be confused with other plants sharing the name Loosestrife that are members of the family Primulaceae.  Often confused with Fireweed – Chamaenerion angustifolium and Great Willowherb Epilobium hirsutum, Purple Loosestrife is an escaped ornamental that tolerates a wide range of weather conditions and will grow in standing water.

FBCP do not advise or recommend that Purple Loosestrife – Lythrum salicaria is eaten or used as an herbal remedy.   It has been used as an astringent to treat diarrhea and dysentery.