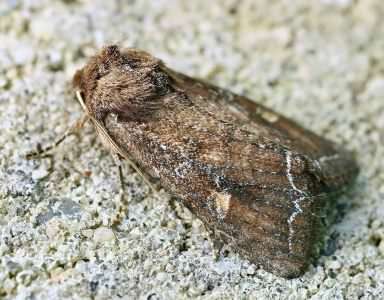 The Bright–line Brown–eye is a common moth species throughout the UK and Europe, it is also found in North Africa, temperate parts of Asia, some parts of the middle east, northern India, China and Japan.  Its name species' name is quite descriptive with it having dark reddish–brown forewings marked with a prominent light orange–brown stigmas, a bright white subterminal line with a distinctive central W shape (the bright–line) and towards the outer edge an orange blotch kidney–mark (the Brown–eye).  Grey hindwings becoming darker towards the outer margin.  It has a wingspan is 35–45mm (1.4–1.8in).  Like many other moths they are attracted to light, sugar and nectar–rich flowers.  Usually seen in flight from late June to July with an occasional second generation from the end of August to early September.

Small spherical white eggs are laid during the night on various leaves of common woody herbaceous plants including Traveller’s–joy Clematis vitalba and Fat–hen Chenopodium album.  These species found in Brickfields Park are also used, Docks, Dandelion, Plantains and Water Mint, Stinging Nettle, Willowherbs, St John’s–worts, English Elm, Hazel and Hop.  Some Willow species are also used, it is also said to be a voracious pest of cultivated tomatoes where it feeds on the fruit, giving it the common occasional name of the Tomato moth.  They overwinter as an underground pupa.  The larva grows to about 40mm (1.6in) long, is an overall green with yellow a line along the sides, edged with blackish grey spiracular lines on the slightly darker upper body part.  The tubercles are black.

The Bright–line Brown–eye is part of the Noctuoidea superfamily which now comprises just over 11,000 species after reorganisation of the some 20,000 species that were originally in the group.  Noctuidae are commonly known as Owlet moths, there are however only five Owlet moth species grouped in the Mesogona genus.