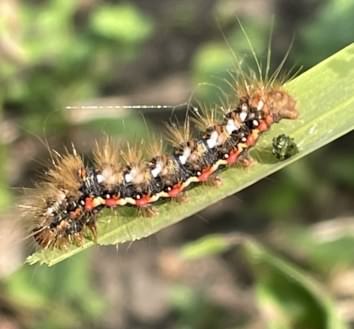 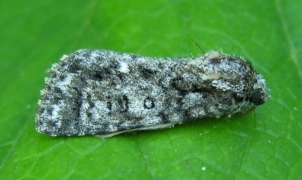 The Knotgrass Moth is a relatively common moth in the UK where it is widely distributed but less so in Scotland, also found through Europe to China and Japan.  It is listed as a UK Priority Biodiversity Action Plan species and has received a lot of research relating to England and Scotland.  It lives in gardens, meadows, woodland clearings, and hedgerows, generally in non-humid areas and as a caterpillar feeds on a wide variety of herbaceous plants including maize, Broad-leaved Dock, Sorrel, Bramble, Thistles, Hops, Strawberries on which it is regarded as a pest, and in the case of our video on Crocosima (Montbretia).

It has a wingspan of 34–44mm (1.3-1.7in), with the forewings a blotched mixture of dark and light-grey shades, while the hindwings are dark brown.  A white spot is seen midway down the trailing edge of the forewing providing a distinct marker.  Over time the Knotgrass Moth like several others has evolved melanistic forms caused by industrial pollution resulting in two variants which have darker grey wings.  It is in decline but given its UK BAP status it is receiving greater awareness and conservation, and may become more abundant.  Current research suggests that Knotgrass Moth are in decline due to habitat loss, poor habitat management, global warming, and environmental deterioration from pesticides and pollution.  It can have two generations in a year although this can vary depending on location the first is in May and June, whilst the second flies in August and September.

The caterpillar is about 40mm (1.6in) long with a dark brown body, white spots along both sides of the body and red spots along the centre of the back.  Tufts of orange hairs grow along the body in rows, two rows along each side of the body and one row along the centre of the back.  Fully grown caterpillars pupate in cocoons of leaves or leaf litter, with adult moths emerging in June but they can be earlier if the weather is consistently warm.  The Knotgrass Moth is one of the commonly found ‘Dagger’ species (Acronictinae) in the British Isles and many parts of Europe which include The Dark Dagger, Grey Dagger, Alder Moth, Sycamore moth and Poplar Grey.