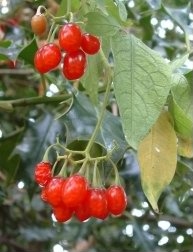 Native to Europe and Asia occurring in a very wide range of habitats, from woodlands to scrubland, hedges and marshes.  Naturalised elsewhere in the world, including North

America, where it is regarded as an invasive problem weed, northern Africa, Europe and Asia.  Woody Nightshade is a semi–woody herbaceous perennial vine, which scrambles over other plants, growing to a height of approx 4m (13ft) with suitable support, in the photos our Woody Nightshade is scrambling up a small Holly bush.  More often it reaches 1–2m (3–6.5ft).  The leaves are 4–12cm (1.5–4.5in) long, roughly arrowhead–shaped, and often lobed at the base.  Star shaped purple flowers of five petals and yellow stamens are in loose clusters of 3–20, 1–1.5cm (0.4–0.6in) across, mature to a poisonous shiny red berry about 1cm (0.4in) in diameter hanging in small clusters.  They are however edible to birds, which disperse the seeds.  The foliage is also poisonous

It grows in all types of terrain with a preference for wetlands and the understory of riparian forests.  The plant grows well in dark areas in places where it can receive the light of morning or afternoon and grows more easily in rich wet soils with plenty of nitrogen.

FBCP do not advise or recommend that Woody Nightshade – Solanum dulcamara is eaten or used as an herbal remedy.   Occasionally mistaken for Deadly Nightshade from the same family Solanaceae.  Woody Nightshade contains Solanine, an alkaloid glycoside which if ingested can lead to vomiting and convulsions and in sever cases death.

Its common name and the Latin "dulcamara" should be taken to mean "sweetbitter" as it comes from "dulcis" meaning "sweet" and "amarus" meaning bitter.  As well as some very poisonous plants (Henbane, Nightshades, Mandrake etc) the Solanaceae family contains some very useful economic plants as the Potato, Tomato, Aubergine, Capsicum and Tobacco.  Folklore and the belief in witchcraft has it that shepherds used to hang Woody Nightshade as a charm round the necks of those of their beasts whom they suspected to be under the evil eye.