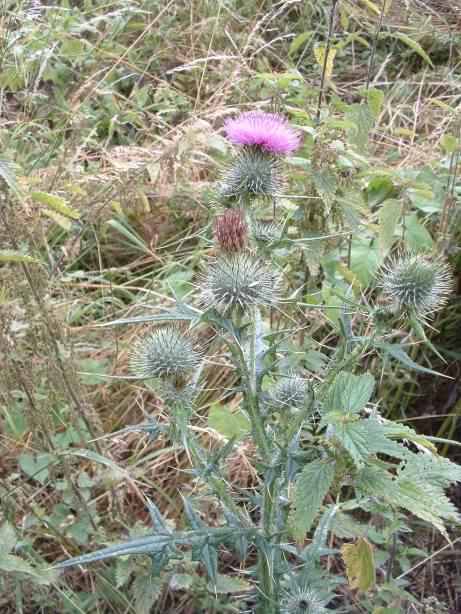 Spear thistle is a common robust biennial or short–lived monocarpic perennial that can be a invasive problem of grassland, waste ground, roadsides, coastal dunes and in woodland clearings.  Flowering during June and July and pollinated by bees and other insects, Spear Thistle rosettes need to reach a certain size before flowering, a process which can take up to four years.  The plant grows at first as a rosette close to the ground with a tap–root and can survive mowing, thus becoming monocarpic if the flower spike is prevented from forming.  A tall plant with large purple flowers contrasting with the bluish–green prickly leaves, it is a familiar sight in late summer.  The flowers are attractive to butterflies and moths, including the Small Copper and the Large Skipper whilst the seeds are eaten by small birds, especially Goldfinches.

Spear Thistle is listed as an Injurious Weed in the Weeds Act 1959.  It is therefore an offence to allow it to spread, though in practice this is not enforced.  Spear thistle spreads only by seed (on fluffy "parachutes"), so thistles growing by roadsides are dispersed as their seed as is wafted along by passing traffic.  Disturbance of the soil and vegetation has been shown to advance the germination of spear thistle so selective weed killers are best used at the early rosette stage, whilst Glyphosate can be used as a spot weeder.  The rosettes can be dug up and providing the crown is removed the tap–root will not regrow.

Dark green leaves have spiny edges and on the upper surface, the underneath appears lighter due to a dense covering of fine hairs.  They are deeply lobed with a long spine at the apex of each lobe.  In its second year, the plant has a large growth spurt producing winged multi–stems which have spines up their length and can reach 1.5m (5ft) high.  They produce many compound flowers with tufts of purple petals protruding from spheres of spined bracts.

FBCP do not advise or recommend that Spear Thistle – Cirsium vulgare is eaten or used as an herbal remedy.   Apparently the flower head can be harvested and when stripped of the spines and pappus, the bases can be treated like globe artichokes, eaten lightly steamed or raw.