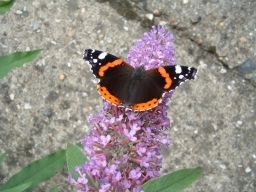 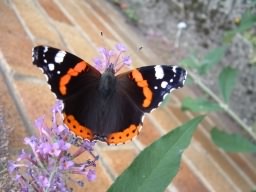 A large butterfly found in woods, parks, marshes, damp areas.  They have a wing span of 4–8cm (1.6–3in), mainly black in colour with a reddish–orange band midway along the forewings and a segmented band along the trailing edged of the rear wings with a small black spot in each segment.  The forewings have white spotted tips.  They have winter and summer forms, the winter being smaller and duller than the larger brighter summer variant.

Females lay eggs singly on the tops of host plant leaves, Stinging Nettle or Hop.  caterpillars of the Red Admiral live within a shelter of folded leaves of the host plant tied together with silk, going through five instars or moults during the larval stage before pupating.  Usually double brooded from March–October depending on climate but there can be one brood in northerly areas and three broods in more equatorial climates.  Adults feed at sap flows on trees, fermenting fruit, and bird droppings visiting flowers only when these are not available, taking nectar from Red Clover, Aster, Lilacs and Buddleia.

Their range covers Europe, North Africa, Asia, New Zealand and the United States from Mexico to northern Canada.  Mainly a migrant to the UK, they can hibernate but cannot survive the coldest winters.  They are territorial butterflies driving away intruders by out–flying and out–maneuvering them.  They patrol their areas in order to find female mates, with males perching on sunlit spots, waiting for females to fly by.  Red Admirals are considered to be people–friendly butterflies that will approach and perch on human beings.