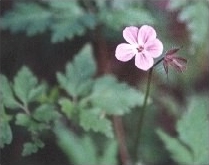 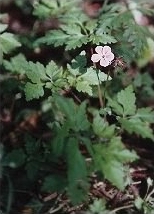 Straggly hairy annual or biennial of rocky areas, woodlands, scree slopes and walls.  Widespread and common throughout the country.  Hairy red tinted stalks up to 40cm (15in), carry heavily cut hairy opposite leaves of three to five lobes with a loose cluster of light pink–rose pink flowers in pairs on short reddish stems, which are seen from May to October.  The flowers are 12–15mm (0.5–0.6in) across, have petals that graduated from white in the centre with white–pink veins from the centre to the petal edge which is a darker pink.  They mature to a capsule containing hairy seeds that can explode out of the capsule when knocked, the hairs catching on clothing or an animal further distributing the seeds.

FBCP do not advise or recommend that Herb Robert – Geranium robertianum is eaten or used as an herbal remedy.   Apparently edible as a salad or made into a tea, although probably unwise as the plant has an unpleasant odour said to be like burning tires or diesel.