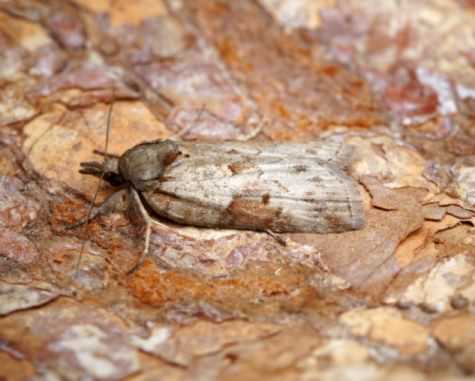 The Oak Nycteoline as its name might suggest is an Oaks specialist but will also be found in mixed deciduous woodlands and on Poplar, Blackthorn, Yew and Willow species.  A common and resident species in the UK found in woodlands, parks and gardens, it is also found in Europe through to Japan and India.  It is a small species with a wingspan of 20–28m (0.8–1.1in), resembling the Tortricidae family of moths which are commonly known as Tortrix or leaf roller moths, and as it was thought to be related to that family it was initially known as the "Large Marbled Tortrix", however this name is now used for the species Sarrothripa revayana.

Like the Mottled Umber, the Oak Nycteoline is another species that appears late in the year with the adults putting in an appearance in August to October and then as a second generation the next year in March to late July.  It is very variable.  The forewing is a blackish grey with darker black lines and faint dark spots indicate the sub–marginal line; the hindwing is a pale greyish fuscous.  Others variants are a pale fawn grey with brown splotches and marks.  The caterpillars are green with the segmental divisions are yellowish.