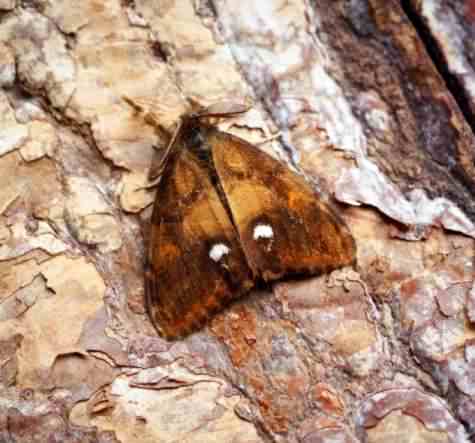 This moth is native to the southern UK and Europe but does occur in the Palaearctic and Nearcticecozone.  Listed as a common resident in the UK it is not listed in the IUCN (2007) Red List.  The male is diurnal and may be found in shrub–based habitats, including gardens, parks, open woodland, fens, hedgerows, heaths and moors, flying from May to October in one long, or sometimes two shorter broods.  As can be seen from the images it is a species that exhibits an extreme sexual dimorphism between the adult male and the female moths.

The male is easily recognisable, the wings and body are a brownish colour with a dark brown band to the postdiscal and marginal wing areas, an orange discal patch whilst the remainder of the wing is a blotched orange and brown.  There is a well defined white comma shaped discal spot.  Wingspan is 20–30mm (0.8–1.2in) and the comb–like Antennae are strongly feathered.

The female is basically a yellowy beige to grey brown hairy blob rather like a small immature but bulbous caterpillar.  Following emergence from her cocoon, to which she remains attached, she gives off pheromones that males can track using their comb–like antennae so they can begin mating.  Although she has vestigial wings she is flightless and will not move from her position during her brief adult life.

The very hairy caterpillars of the Vapourer moth are quite spectacular, each blueish grey body segment has several red tubercles from which sprout a dozen or so white hairs, a further four body segments at the rear have large dense tufts of pale orange bristles, all combining to make the caterpillar look like a rather hairy toothbrush.  Brownish coloured eggs are laid on the females vacated cocoon and they overwinter at the egg stage.

The caterpillars feed on a wide range of deciduous trees and shrubs including Birches, Hawthorns, Lime, Blackthorn, Oaks, Willows, Bilberry – Vaccinium myrtillus, Cotoneaster and Pyracantha.  It has also been recorded damaging Sitka Spruce and other conifers when available.