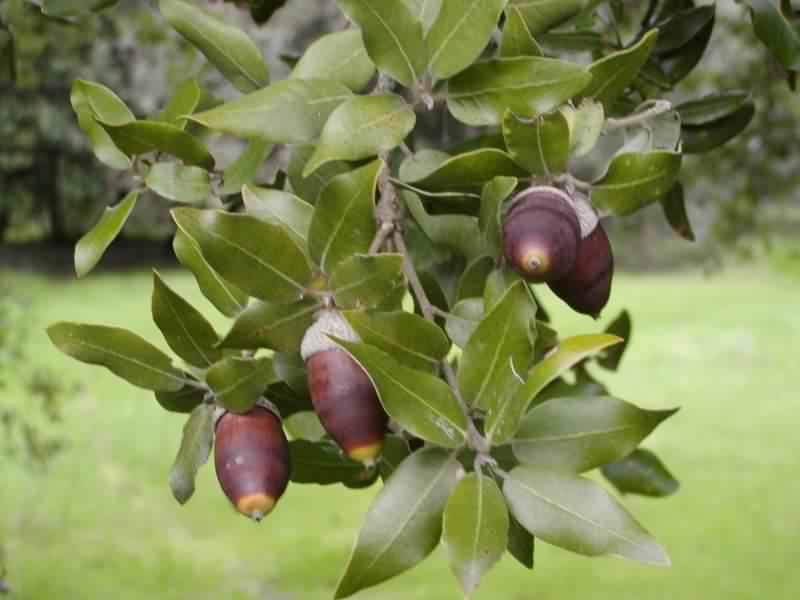 Photo ©2005 Img
Click any photo for a larger image 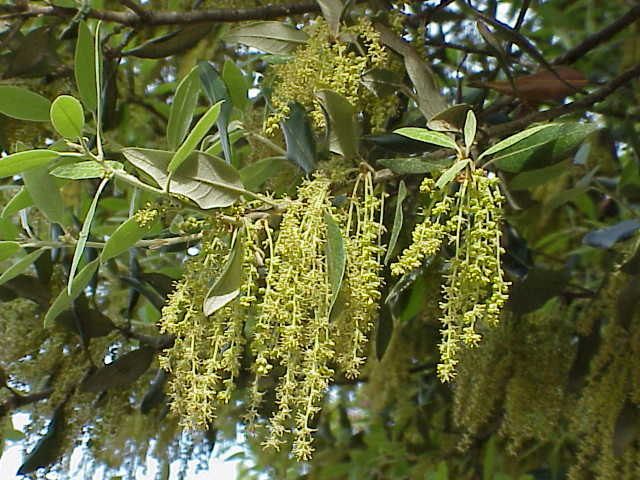 Holm Oak is a large evergreen broad leaf tree native to the Mediterranean region and Western Europe taking its name from "Holm", an ancient name for Holly, it is an introduced species in the UK from around the late 1500s.  Often planted as windbreaks in coastal areas due to its resistance to salt water spray, they are also found in parks and gardens.  Dark green almost black oval spiny leaves minutely hairy underneath, are superficially similar to Holly in colour and shape, are spiny when young maturing to a spineless form when older.  Mature trees grow to 20m (65ft) and can develop a large rounded crown.  The bark is black and finely cracked.  It is a monoecious species, with both male and female flowers are found on the same tree.  Usually wind pollinated, male flowers are yellow catkins whilst, female flowers develop into smaller rather pointed acorns, green at first maturing to a dark red–brown before falling.  It is not a great species habitat as are the native English and Sessile oaks, but its catkins provide a source of pollen for bees and other insects, while its dense, evergreen canopy offers year–round shelter for birds.  The acorn was seen as a sign of fertility and wearing acorn jewellery was believed to increase fertility.  It is an evergreen but old leaves fall 1–2 years after the new leaves emerge.

its timber is very hard and strong and it is reputed to have been used by the Romans for the wheels of carriages and for agricultural tools.  In ancient Greece the leaves of the Holm oak were used to tell the future and they were also used to make crowns to honour people.  Leaves are 4–8cm (1.6–3.1in) long and 1–3cm (0.40–1.18in) wide, with those on the lower branches of young trees often being larger (up to 10cm or 3.9in long), toothed or somewhat spiny, possibly as protection from grazing animals.  Apparently listed as an alien invader in the UK the Holm Oak is cited as damaging biodiversity in the United Kingdom, but is not currently listed in Schedule 9 of the Wildlife and Countryside Act.  It is normally not frost tolerant, which would prevent it from spreading north, but with climate change it is successfully spreading.

FBCP do not advise or recommend that Holm Oak acorns – Quercus ilex are eaten or used as an herbal remedy.   The Holm Oak is one of the top three trees used in the establishment of truffle orchards, whilst the acorns are fodder for pigs used for Serrano and Ibérico hams.  Boiled, the acorns can also be used as a medicinal disinfectant.